EXPLORER OF THE SEAS 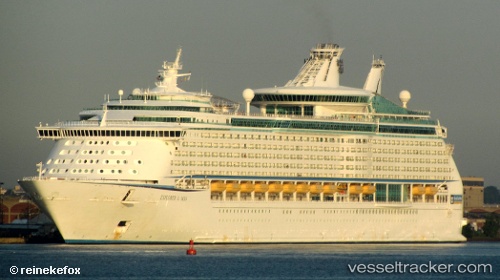 Port entry denied due to Covid-19 cases on board

The 'Explorer of the Seas' was denied making its scheduled call at St. Lucia on Dec 16, 2021, and instead had a day at sea due to some confirmed cases of Covid-19 on board. The vessel has continued with its voyage as scheduled. The captain previously had confirmed over the PA system that some crew members had tested positive for the virus and were immediately put into isolation. Royal Caribbean has swiftly dealt with the positive tested crew members, and protocols have stopped any spread. The ship berthed in Bridgetown on Dec 17, in Basseterre on Dec 18 and in San Juan on Dec 19. It now en route to Charlotte Amalie with an ETA as of Dec 20.

On July 9, 2020, the medical evacuation of a crew member was carried out from the 'Explorer of the Seas' about 20 miles South of Malaga, due to internal bleedings. The On-board doctor recommended the treatment ashore, and the SAR boat 'Salvamar Alnitak' was tasked by Salvamento Marítimo. The patient and a nurse were disembarked and taken to Malaga for medical treatment.

Explorer of the Seas to homeport in Italy after royal amplification

Royal Caribbean International’s Explorer of the Seas will be the first ‘Royal Amplified’ ship to homeport in Rome, Italy following a US$110 million renovation in 2020. Following the refurbishment that is part of Royal Caribbean International’s US$1 billion Royal Amplified programme, Explorer of the Seas will offer new onboard entertainment options, such as glow-in-the-dark laser tag, the rejuvenated adults-only Solarium, and the Perfect Storm duo of racer waterslides, which will be located on the top deck.