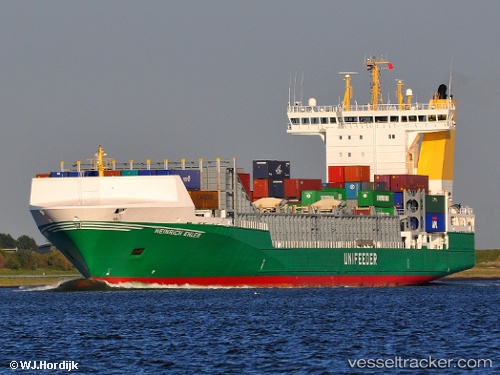 On Nov 12, 2016, at 8.40 a.m. the "Heinrich Ehler“ veered off course in dense fog while approaching the southern lock iof the Kiel-Canal in Kiel-Holtenau and allided with the dolphins, The bulbous bow severely damaged a heavy wooden fender. A chain of the holder tore off. The visibility was at the time of the accident under 100 meters. The cause of the accident was a faulty interpretation of the electronic chart. The damage was around € 20000. The damaged fender should be replaced on Nov 14. The container ship only suffered scrapes and was able to continue the journey from Riga to Hamburg after a short waiting period. It reached Hamburg around 1 a.m. on Nov 13 and continued to Eurogate Bremerhaven on Nov 14 at 7 a.m. German report with photo: http://www.kn-online.de/News/Nachrichten-aus-Kiel/Nebel-Schiff-rammte-Holzfender-in-Holtenau

Maersk-Seago's recent modifications to the group's Baltic Sea services have triggered further developments in the trade to this region. Maersk and its intra-Europe sister company are about to change their services to the Baltic, and especially to St Petersburg, from a 'summer pattern' into a 'winter pattern'. This move caters for seasonal fruit imports with improved direct links from citrus export countries and it takes into account the annual icing season, which requires some ports in the Baltic to be covered with ice-classed vessels. In this respect, Maersk is to stop its 'KNSM' in favour of two direct Morocco-St Petersburg links. The carrier also cuts the Baltic leg from its 'CRX' in mid-October, as this service is not run with ice-classed ships. In the wake of these changes, Maersk-Seago is to open a new Bremerhaven-based weekly Baltic Feeder to Kotka and St Petersburg. The new feeder will start operations on 16 October with the 1,404 teu ice-classed HEINRICH EHLER and a second yet to be nominated vessel on a 14-day roundtrip.