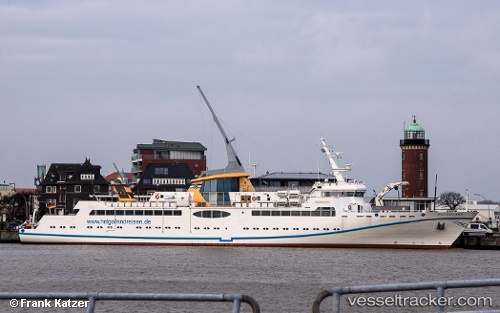 Passenger jumped over board and died

On March 30, 2022, a passenger of the 'Helgoland' committed suicide by jumping over board, while the ship was en route from Cuxhaven to Heligoland at 12.20 p.m. Another passenger saw him going over the side between Cuxhaven and Heligoland between the buoys 2 and 4 on the Elbe. A helicopter of the federal police, the 'Helgoland', 'Elbe', 'Bayreuth', 'Heincke', 'Halunder Jet' as well as the lifeboats 'Anneliese Kramer', 'Theo Fischer', 'Alfried Krupp', 'Theodor Storm' and 'Hans Hackmack' were mobilized to the position. After the body was recovered, the forces were stood down. The body was taken to Cuxhaven and identified as a man from Lower Saxonia.

Medevac at jetty in Cuxhaven

In the evening of Aug 9, 2018, the lifeboat "Anneliese Kramer" of the DGzRS station Cuxhaven was called to take an ambulance and paramedic to the "Helgoland" which was on its way back from Heligoland to Cuxhaven. A passenger had fallen ill on board. Because the gangway of the "Helgoland" in the ferry port of Cuxhaven was flooded, the ferry docked on the Alte Liebe-jetty where the patient was handed over to medicals on shore. German report with photo: https://www.seenotretter.de/aktuelles/seenotfaelle/ansicht/news/zahlreiche-einsaetze-der-seenotretter-gewittertief-nadine-zieht-ueber-nord-und-ostsee/

On Dec 31, 2017, around 1 p.m. the "Helgoland" with 74 passengers and four crew members on board allided with a jetty on Heligoland island after its arrival from Cuxhaven and was disabled. The accident happened during a turning manoever in port after the arrival from Cuxhaven. The ship tried to turn to port side to get to the berth with the bow pointing towards the sea. During this manoever the bow thruster failed, and the ship was caught by winds and pushed towards the opposite quay. The crew could not get the ship under control in time, nor did the lifeboat "Hermann Marwede“ which launched its daughter boat „Verena“ in vain. The stern crashed into the east quay and was damaged, the ship also hit two yachts which were moored inside the port. After the ferry was secured at the quay, the uninjured passengers could be disembarked. They were medically checked by the volunteer fire brigade and the DGzRS and taken to shore. After 45 minutes the fire rescue was stood down. The police launched an investigation aboard the ship in the South Port. The "Helgoland" left the port again at 3.30 p.m. and returned to Cuxhaven. On Jan 1, 2018, she berthed at the Mützelfeldt Yard in Cuxhaven for repairs of the damage. After repairs to hull and propulsion she left the yard again on Jan 22 around 10.40 a.m. and started the first trip to the island in 2018 soon after. http://forum-schiff.de/phpBB3/viewtopic.php?f=9&t=6284#p143725 https://www.seenotretter.de/aktuelles/neuigkeiten/ansicht/news/faehre-helgoland-kollision-im-inselhafen/ http://www.ndr.de/nachrichten/schleswig-holstein/Helgoland-Schiff-kracht-gegen-Kaimauer,helgoland950.html http://www.yacht.de/aktuell/panorama/ich-bin-tausend-tode-gestorben/a115313.html