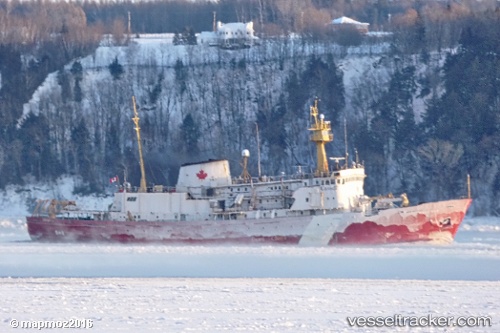 Refit work has been halted inside parts of the "Hudson" after lead paint was discovered during maintenance work at a St. John's shipyard. The vessel has been hauled out of the water for a life extension refit in an effort to keep the ship at sea until 2024, which is when a replacement is scheduled to enter service. Interior spaces where the lead paint was discovered have been sealed off, but other planned maintenance work on Hudson were underway. The Canadian Coastguard was working with multiple parties, including Public Services and Procurement Canada, and Health Canada, unions and the shipyard. Air quality testing was being carried out and blood testing was made available to all employees working in the affected area. It was not immediately clear what is being done in areas where containment measures have been put in place. The "Hudson" was undergoing a $10-million refit at St. John's Dockyard Ltd, known as NewDock. The shipyard is replacing steel and repairing various areas of the vessel's decks and tanks. Work began on Feb 25, 2019, and was scheduled to be completed in fall. The "Hudson" will return to its Halifax base at the Bedford Institute of Oceanography and undergo more maintenance work at the dock. The ship is still forecast to be back in service by April 2020. The refit at NewDock is Phase 2 of a life extension for CCGS "Hudson". Phase 1 was carried out in 2017 by Heddle Marine in Hamilton. The $4-million refit was five months behind schedule and still unfinished when the government towed the Hudson out of the shipyard rather than risk having it trapped for months by the winter closure of the St. Lawrence Seaway. The delay forced DFO to spend $2.5 million chartering vessels to carry out science missions on the East Coast of Canada because Hudson was unavailable. The "Hudson" was supposed to be replaced as early as 2014 as part of the national shipbuilding strategy, but the project to build a new offshore oceanographic science vessel at Vancouver's Seaspan shipyard is behind schedule as the yard works on two navy supply ships. Earlier this year the Davie Shipyard in Quebec had told the federal government it would not bid on the latest life extension refit job, saying the "Hudson" was beyond repair.

Shipyard declines to bid for overhaul of ageing vessel

A Quebec shipyard has condemned the CCGS "Hudson" as beyond repair, declining to bid on a lucrative contract to overhaul the 56-year-old vessel on the grounds that it“presents a serious and real threat to the safety of life at sea. In a letter delivered on Jan 22, 2019, to officials with Public Services and Procurement Canada, Davie CEO Jared Newcombe said his company, based in Lévis, Que., would not bid on the contract to upgrade the icebreaker as Davie believes the vessel to be beyond repair. The federal government was trying to squeeze another few years of service out of the "Hudson" which is the oldest ship in the Coast Guard’s fleet. Bidding on the life-extension contract, expected to be worth about $20 million, ended this week. The Harper government announced in 2007 that the "Hudson" was to be replaced by 2012 and the contract to replace her was awarded to Vancouver’s Seaspan shipyard. But that project is mired in delays and it is not clear when there will be a replacement. There is not yet a confirmed date for construction to start while the projected budget of $331 million to build the Hudson’s replacement is under review. The "Hudson" did have a $4-million refit in Hamilton, Ont., in 2016, and has had more work done on it since it returned to its East Coast port in Dartmouth, N.S., in 2017. But Davie told the government that, in its view, the "Hudson" has now reached the end of the line. The level of degradation to the hull, fuel tanks, onboard systems and other structural elements presents a serious and real threat to the safety of life at sea as well as the environment. His company had to consider its own liability should it have won the current life extension contract, “as well as ethical, repetitional and environmental considerations.

Canada’s most famous scientific research vessel, the coast guard vessel Hudson, is getting a $1-million refit. “The CCGS Hudson is a 49-year-old vessel and needs regular maintenance-refit to ensure it meets all marine standards,” Stephen Bornais, the Canadian Coast Guard’s spokesman in the Maritimes, said in an email on July 6, 2012. Bornais said Hudson, the first vessel to circumnavigate North and South America, underwent a survey in January as part of planned inspection requirements. “During the survey, steel corrosion was discovered in a number of areas. The affected areas are being repaired as part of an ongoing maintenance contract which is scheduled to be completed later this month.” A regulatory dry-docking of the vessel, which must be carried out every couple of years, will take place after the steel repair work is done, Bornais said. http://thechronicleherald.ca/business/114057-research-ship-hudson-to-get-1m-refit