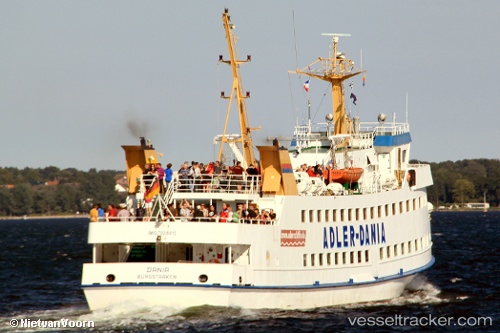 On Jan 17, 2020, at 1.30 a.m. a smouldering fire broke out in the engine room of the 'Koi' during welding works. The ship was actually being drydocked at the Husum Shipyard where it was undergoing maintenance since Jan 1. The fire rescue was alerted and managed to put the fire out in the early morning hours.

Party on party ship terminated due to broken hose

On May 27, 2017, a broken cooling water hose aboard the "Koi" caused development of what was thought to be dense smoke on the Elbe. The hose of the starboard main engine was torn off shortly after the departure from Hamburg at 4.45 p.m., and water which was leaking out hit the hot exhaust pipe. The ship was underway with about 600 guests on board. The "Spirit of Goa" party had to be terminated prematurely. The vessel was still maneuverable by the twin engine propulsion. For security reasons and to avoid any risk, the captain decided to disembark the guests at Teufelsbrück in Hamburg. There was no danger to passengers, ship and crew. The fire brigade had been positioned and also a rescue helicopter had been alerted. There were, however, no injuries. German report with photo: http://www.abendblatt.de/hamburg/polizeimeldungen/article210713135/Dichter-Rauch-Partyschiff-mit-600-Gaesten-evakuiert.html

Instead of scrapping its 35 year old ferry 'Adler Dania', north German operator Adler Schiffe this year spent €2 million redesigning and converting it into an excursion and event ship which has now gone back into service. The 53.6m long and 10.1m wide Koi draws 2.1m and carries up to 650 passengers. She was converted at Husumer Dock & Reparatur (HDR) and now operates as a club-cum-party and event ship either on charter excursions or while moored in North Sea and Baltic ports including Husum, Flensburg, Kiel, Luebeck and Hamburg. Plans are to also use the ferry along the entire German Baltic coast as far as Ruegen and Wismar. Similar ships operate on the Rhine and abroad. Koi was built in 1980 in Husum as an excursion boat and used for Duty Free excursion trips as Adler and later between Germany and Poland as Adler Dania. North Frisian shipowner Sven Paulsen at Adler Schiffe ordered her conversion and extensive modernisation and refurbishment early this year. Source and more to read at http://www.maritimejournal.com/news101/vessel-build-and-maintenance/vessel-repair-and-maintenance/old-german-ferry-is-transformed