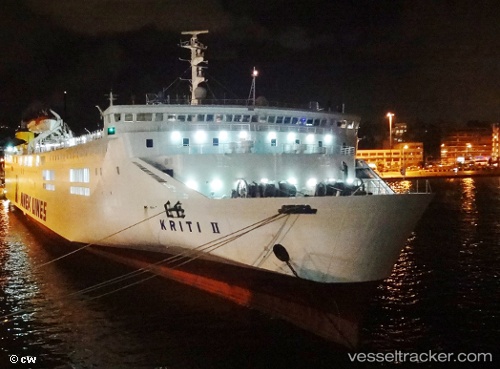 In the night of Aug 14 the "Kriti II", which was underway from Heraklion to Piraeus, suffered a mechanical damage to the port side main engine 36 miles north of Heraklion. The vessel, with 907 passengers and 97 crew members on board, sailed to Piraeus at a reduced speed, where it berthed in the morning of Aug 15. The passengers, 178 cars, 22 trucks and 62 motorbikes were landed. The Central Port Authority of Piraeus detained the ferry until repairs were carried out and a class certificate presented by the attending classification society. The ship sailed again at 8.15 p.m.

On Aug 8, 2019, the Piraeus Port Authority was informed by the captain of the "Kriti II" that the vessel had suffered a mechanical damage four nautical miles northwest of Agios Georgios, while enroute from Heraklion to Piraeus, where it safely disembarked 679 passengers and 243 vehicles. The Port Authority of Piraeus banned the ship from sailing until the rdamage was repaired and a class certificate submitted by the attending classification society. The passengers were transported to their destinations in responsibility of the ferry company ANEK Lines SA.

Malfunction to port main engine at the port of Iraklion, after repairs sailed to Piraeus

Roll on roll off Kriti II (27239 gt, built 1979), experienced a malfunction to its port main engine, at the port of Iraklion, Greece, on the evening of Jul 2. The vessel was due to sail on its scheduled service to Piraeus, at 2100 hrs. Following an inspection by the port authority, the vessel was detained in port, until the engine was repaired. Later, after engine repairs and the issue of a class maintenance certificate, the vessel was permitted to sail to Piraeus, with 724 passengers on board.