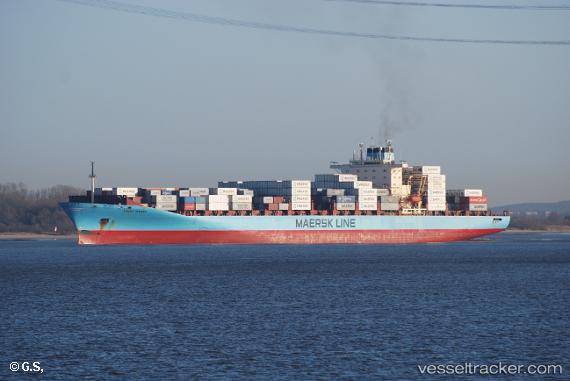 The ferry “Nápoles”, 23975 (IMO: 9243423), which covers the Malaga-Melilla de Balearia line, suffered a collision on March 12, 2022, at 03:00 a.m. with the “Laust Maersk”, which was en route from Algeciras to Taranto with an ETA as of March 14, in the waters of the Alboran Sea. One container got stuck next to the port side bridge wing the ferry and it had serious damages at the port side bow. No personal injuries have been reported. The accident has been reported to the Almeria MRCC, and the protocols established for these cases have been activated. The “Nápoles”, which will be replaced by her sister ship “Sicilia”, arrived in Melilla at 06:30 a.m., and after disembarking the passengers, work was now being done to remove the container and assess the damage before the damage will be repaired at a shipyard. Report with photos: https://www.puentedemando.com/el-ferry-napoles-colisiona-de-madrugada-rumbo-a-melilla/

On Sep 5, 2021, at around 6:30 a.m., the Tarifa MRCC received a notice from the 'Laust Maersk' indicating that it had heard a request for help, but did not see any lights in the area, so they suspected that it could be a small boat. Both the SAR boat 'Salvamar Arcturus' and the Helimer 202 helicopter searched for several hours until they located a person in the water at 8:40 a.m. The castaway reported that he was sailing with another migrant in the inner tube of a truck tire and that he could not calculate the time elapsed since he stopped seeing him. When presenting symptoms of hypothermia, he was immediately transferred by boat to the port of Algeciras to be treated. On his side, the Helimer 202 located the other migrant at 9:10 a.m. and reported his position to a Civil Guard patrol boat in the area, which proceeded to rescue him and transferred him to the port of Algeciras.

The 'Laust Maersk', while entering the Zandvliet lock in Antwerp, allided with the wall and suffered a crack of about three metres length above the waterline at portside on Aug 23, 2019, at 3 p.m. The ship returned to berth 722. On Aug 24 it left the port at 2.45 p.m. and headed to Rotterdam, where it arrived on Aug 25 around 1 a.m.