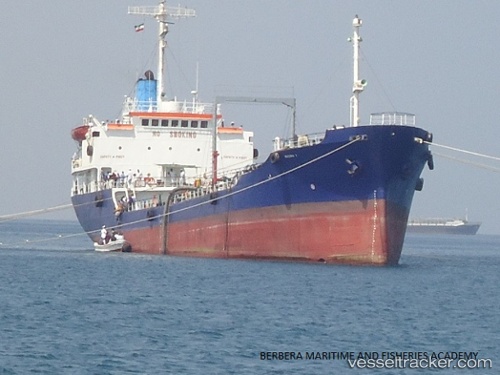 mt Jubba XX after it arrived Bosaso port at 13.30 (LT) on Thursday afternoon and before she left for Berbera in Somalia's breakaway region of Somaliland. Somali pirates hijacked the United Arab Emirates-flagged oil product tanker early on july 16, 2011 as she made her way from UAE to the port of Berbera, but Puntland officials secured its release after local businessmen paid a $200.000 ransom, rather than the shipowner. more:http://www.somaliareport.com/index.php/post/1243/Crew_of_MT_Jubba_XX_Reported_Safe_but_Tired

Emirates International Shipping, manager of the hijacked m/t Jubba XX, said July 28 2011 that vessel was released after negotiations involving Somali tribal elders and government officials in Puntland, no ransom was paid. Crew of 16 (1 Sri Lankan, 1 Sudanese, 1 Myanmar, 1 Kenyan, 4 Somalis, 3 Bangladeshi and 5 Indians) is unharmed, vessel now under way to Bosasso, ETA July 28, after a short stay in Bosasso vessel will resume original voyage with some 4000 mt of fuel oil, destined for Berbera. Pirates didn’t take ransom, but robbed crew and vessel flat, taking everything from money to vessel’s satellite phone and crew’s clothes, leaving them with just a Somali mobile phone. Owner of the vessel, Jubba General Trading Co., confirmed the release.

Ecoterra Intl reports on July 23: Pirates on MT JUBBA XX were attacked from the land and sea by security forces from Puntland, which endangered the safety of the tanker fully laden with petroleum products. A business vessel had been recruited by force by the Puntland forces and the chief-engineer coerced to steam the vessel after the MV JUBBA XX. The captain had refused to hand the vessel over. Heavy machine guns were installed and the group sailed after the tanker. Attacks were then launched from land on the camp of the pirate-gang and from the sea. Luckily nothing dramatic happened to the tanker or the crew so far, our marine observers report, but unfortunately the vessel is still under pirate control, left the area of Bargaal and was commandeered to Garacad further south on the Somali Indian Ocean coast.