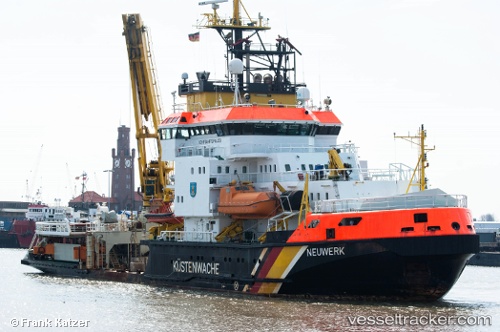 On Dec 9, 2020, the 'Neuwerk' was sent to the North Sea area at the White Bank, where Dutch fishermen had reported sunk containers, around 200 kilometers from the Elbe estuary. The fisherman Jelle Hakvoort had detected objects on teh bottom 90 miles north of Schiermonnikoog on Dec 3. first detected objects near the top of the bank with sonar. This perception was confirmed again on a second approach. He quickly hauled up his nets but did not save the sonar images. For their part, two colleagues located at least four containers. There was a large container ship spotted not far from the spot. The ‘Maersk Munich‘ came into the focus, having been in the area on the voyage from Bremerhaven to Gothenburg on Dec 3, having its speed reduced and headed northwards at slow speed. In the afternoon she regained speed and berthed in Gothenburg on Dec 5. She was currently at the APM Terminal in Aarhus. The Danish shipping company A.P. Moller-Maersk denied any possible involvement. All their captains were asked whether they had lost cargo in the past few weeks, but no corresponding report was received. The investigation was continued in close contact with the German authorities. No earlier than Dec 10, the water and shipping authoritiy in Cuxhaven expected more precise information about the objects on the seabed.

Repair of collision damage in Wewelsfleth

After a collision with a quay in Cuxhaven, the "Neuwerk" left the port on Oct 1, 2016, bound to the Peters Werft in Wewelsfleth, where the ship is being docked for repairs since.

The "Neuwerk" took the wreckage of a 60-m-rotor blade, which broke off from a wind turbine in the offshore park Northsea East about 35 kilometers north of Heligoland, first to the port of Heligoland on June 20, 2015, then to Bremerhaven. After the accident on June 19, all 48 plants have been closed down temporarily. The exact circumstances were being be investigated now. The damaged facility was not yet removed by operator RWE. Meanwhile, parts of the wind farm which started working only on May were again in operation. German report with photo: http://www.ndr.de/nachrichten/schleswig-holstein/Rotorblatt-in-Windpark-vor-Helgoland-gebrochen,windpark410.html