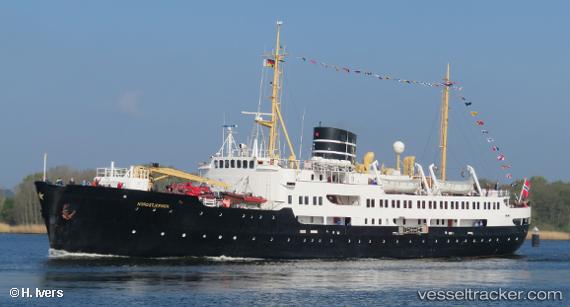 Police arrested 14 crew members of the former Hurtigruten vessel "Nordstjernen" in the morning of Apr 6, 2017, at the quay in Bodø center. The crew worked for many years for the company. The ship had sailed two tours in Northern Norway in recent weeks in the so-called Arctic Haute Route, between Tromsø and Bodø. The men were arrested on suspicion of violating the Immigration Act. Police was investigating both the work and the working conditions of those arrested. After Hurtigruten sold the ship a few years ago, the company periodically rented it from Vestland Marine to cruises and special sailings. Hurtigruten has hundreds of subcontractors. The Vestland Marine was founded in 1997 and now has its base in Gdynia. It started its operations with the passenger ship in 2014. The 14 arrested were Philippine nationals. The rest of the crew of 25 consisted of Polish and Lithuanian nationals, and two Norwegians. The company, which owns five ships, had hired the crew seven days on two different trips. Until April 27 the same crew worked additional nine days on two separate trips. The company said there has been a misunderstanding caused by different perceptions about work permits for non-EU and Schengen. The ship arrived in Bodø under the so-called NIS register (Norwegian International Ship). - But under the 16 effective sailing days they sail under NOR (Norwegian Ordinary Ship Register). On April 27th they would be back in NIS, before the ship will enter the yard in Haugesund, before it will be sailing in Svalbard.

Nordstjernen to be repaired at Westcon

The "Nordstjernen" will be repaired at Westcon in Ølsfjorden and sailed from Haugesund on Nov 12 at 3.30 p.m. Before, divers were sent down to investigate the damage, and we Norwegian Veritas and the Norwegian Maritime Directorate also was on board the ship. The police had been on board since the early morning and questioned several of the crew of 21. Three of the crew also had tp pass breathalyser tests but there was no suspicion of drunk driving . While the cause of the grounding was not yet known, the crew has indicated that there was talk of an error in handling. The ship suddenly had veered to starboard and got stuck. The police had to analyze the tachograph which contained the data from the departure from Stavanger to the grounding site at Karmsundet. The vessel was underway from Gdynia to Bergen for a future use as hotel and restaurant ship and had been completely overhauled and upgraded. When the ship may finally reach Bergen was yet unknown due to the major bow damage suffered in the grounding with visible holes in the forepeak region and leaks in two or three ballast water tanks. The commander of the Coastguard vessel "Ålesund" had found the ship well up on the shore and was convinced it must have had some speed when it ran aground. Norwegian reports with photos and videos: http://www.nrk.no/rogaland/politiet-etterforsker-havariet-1.11351800 http://www.h-avis.no/nyheter/nordstjernen-tar-inn-vann-1.8155113 http://www.bt.no/nyheter/lokalt/Nordstjernen-skal-bli-hotellskip-3004228.html

On Nov 11, 2013, at 10 p.m. the "Nordstjernen" with 21 persons on board ran aground at the northern spit of Storøy in the Karm Sound, west of Tonjer l/h. Two tugs failed to refloat the vessel on Nov 12 at 3 a.m. It finally could be refloated at 7 a.m. with the high tide. The ship was pulled off by three tugs including the "Mega Mammut" and docked in Haugesund around 7.30 a.m. where the Haugaland and Hardangerfjord police boarded the vessel at the Garpaskjærs Quay to interrogate the crew and take drug tests of the bridge crew. The ship suffered some damage but was not leaking. The Norwegian Coastguard deployed the patrol boat "Ålesund" which was monitoring the situation since 1 a.m. and a Seaking helicopter, the NSSR the lifeboat "Bergen Kreds" which in vain tried to pull the "Nordstjernen" off at 11.30 p.m. Norwegian reports with photos and video: http://www.bt.no/nyheter/innenriks/Nordstjernen-pa-grunn-ved-Haugesund-3004026.html http://www.h-avis.no/nyheter/skip-pa-grunn-i-karmsundet-1.8154483