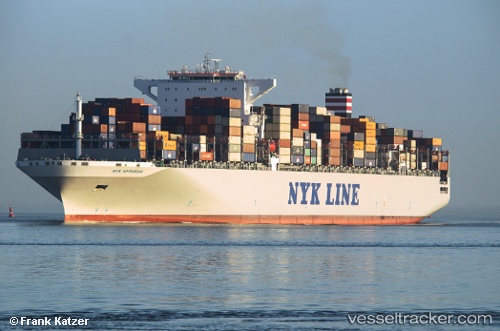 Nyk Hyperion, built in 2013 unit with a capacity of 13 000 TEU, is 366 meters long and 48 meters wide. It belongs to the shipowner NYK Line – Nippon Yusen Kaisha. It was the fourth ship which docked in the DCT Gdańsk under the G6 Alliance. https://youtu.be/ktpmbZTOq4E

Samsung Shipbuilding and Heavy Industries has handed over the 13,208 teu vessel NYK HYPERION , unit number eight in a series of ten neo-panamax ships ordered in March 2011 by OOCL. The ship follows the OOCL BANGKOK, delivered in September. Six of the vesssels will come on stream for OOCL, while four of them are to be chartered out to Japan's Nippon Yusen Kaisha. In a few days, the new NYK HYPERION is to join the G6-Alliance's Far East to Europe service 'Loop 7', where she replaces the 10,660 teu APL YANGSHAN. The NYK HYPERION and her sisters are 366,47m long and 48.20m (19 rows) wide. The ships are powered by an MAN B&W12S90ME-C9.2 main engine that is electronically down-rated to only 54,200 kW. Two more ships of the series are scheduled to come on stream in the first quarter of 2014.

In celebrating the delivery of the eighth 13,208 TEU containership to OOCL, a christening ceremony to commemorate the unveiling of the new mega vessel was held on Geoje Island in South Korea today, the Company said in a press release. Leased to NYK Line of Japan, it was named by Sponsor Mrs. Harriet Tung, wife of Mr. C. C. Tung, Chairman of Orient Overseas (International) Limited, as the m.v. NYK Hyperion. This vessel is the eighth of the ten 13,208 TEU sized containerships ordered by OOCL from Samsung Heavy Industries. The NYK Hyperion will be serving the Asia-Europe trade on the Loop 7 service where her port rotation is: Qingdao / Shanghai / Hong Kong / Yantian / Singapore / Salalah / via Suez Canal / Rotterdam / Hamburg / Southampton / via Suez Canal / Singapore / Yantian and back to Qingdao in a 77-day round trip.