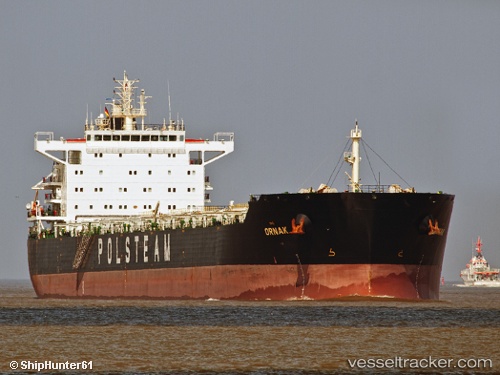 On Nov 1, 2020, at 9.35 a.m. the Pesca II helicopter medevaced a crew member from the 'Ornak', which was enroute from Nikolayev to Montoir-de-Bretagne, ETA Dec 2, 27 miles NNW from Cape Ortegal (A Coruña). The alert has been received at 8.35 a.m. as the man needed medical attention. Around 9 a.m., the 'Pesca II' was mobilized from Xunta by the Fisterra MRCC. He was transferred to the Hospital da Costa, in Burela (Lugo).

The Coast Guard oversaw the successful refloating of the "Ornak" on Apr 18. At approximately 9:35 a.m., the bulker was refloated offshore of the Virginia Beach Resort and Convention Center and repositioned to the Lynnhaven anchorage. Agencies involved in the removal of the grounded ship were Svitzer, the contracted salvage company, McAllister towing, the Virginia Pilots and the Coast Guard. The vessel was now undergoing inspections to verify that the ship posed no hazard to the port or the environment prior to being returned to commercial service. After the ballast water was pumped off, two McAllister tugs, the 5,150 horsepower "AJ McAllister" and the 4,650 horsepower "Emily Anne McAllister", attached tow lines to the vessel and slowly began towing the ship toward deeper water. The vessel was freed on an incoming tide at approx. 9:35 a.m. and anchored further from shore where an underwater hull survey was conducted. Report with photos: http://www.uscgnews.com/go/doc/4007/2150482/Coast-Guard-oversees-bulk-carrier-refloating-off-Virginia-Beach#sthash.YekZ78Z1.dpuf

Salvage off Virginia Beach due to start

The Coast Guard on Apr 17 was reviewing plans for the salvage of the "Ornak" which was scheduled to begin Apr 18 morning near First Landing State Park in Virginia Beach. Ballast water was to be pumped off the vessel in the morning and tug boats would attempt to remove the vessel at high tide, which was expected at approximately 10:45 a.m. Once the vessel was freed, it was to be moved to Lynnhaven Anchorage for a hull inspection to be completed by a dive team. Once the ship was deemed safe, the Coast Guard would remove the captain of the port restrictions and allow the vessel to be put back into service. Report with photos and video: http://www.uscgnews.com/go/doc/4007/2144906/Salvage-plans-progressing-for-bulk-carrier-aground-in-Virginia-Beach-VA#sthash.OdC9wemv.dpuf