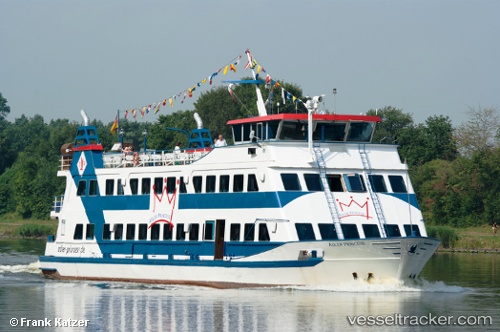 The 38.9m former excursion ship 'Adler Princess', rendered largely useless by extensive smoke damage in a fire in Hamburg last year, has now been completely renovated and given a new lease of life. The 8.7m wide ship, built by Swedish yard Marinteknik Verkstads in Öregrund in 1993, was first owned by Dutch interests and was sold to Adler Schiffe in Germany’s Westerland in 1995 and renamed Adler Princess. After initial duty-free route service between Usedom and Poland the ship was used for excursions along the Kiel Canal from 2007. It has now been renamed Princess and converted into an up-market event and restaurant excursion ship. Adler Schiffe said it will continue to see service, like its predecessor, on the Kiel Canal and on the Eider and the Elbe rivers. Now however its range has been extended to include the Weser tributary Hunte. It will also be a regular visitor to some of north Germany’s best-known international maritime events, like the Kieler Woche sailing regatta and Hanse Sail in Rostock. - See more at: http://www.maritimejournal.com/news101/vessel-build-and-maintenance/vessel-repair-and-maintenance/german-passenger-ship-revamped-after-fire#sthash.RaYXv0X9.dpuf

After the fire on the "Adler Princess" in Hamburg on Dec 17, 2016, the ship was repaired and largely refurbished at the Jöhnk Yard in Hamburg. It left the port on Apr 14, 2017, for the new schedule which started with a trip on the Kiel Canal on Apr 15. In the afternoon of Apr 16 the ship, now operating as "Princess", berthed in Kiel. Photo: http://www.forum-schiff.de/phpBB3/viewtopic.php?f=9&t=1377#p135767

Fire on passenger ship in Hamburg

On Dec 17, 2016, at 1.45 a.m., 2016, a fire broke out aboard the "Adler Princess" at the fish market in Hamburg-Altona. Three crew members were able to leave the ship safely. One of them had remarked the fire in the galley on the main deck. The fire rescue was alerted and on scene with 40 men and put out the flames with hte help of respirators. Then the ship was ventilated. Accodring to first findings, an electrical line in the rear area had caught fire. The police launched an investigation. The damage was estimated to be around 100.000 Euro. The New Year's Eve cruise on Dec 31 in Hamburg had to be cancelled. If the ship is operational again with the start of the regular schedule of the Adler Company in mid-April 2017 was not yet sure. Germaan reports with photos: http://www.shz.de/regionales/hamburg/hamburger-hafen-feuer-auf-adler-princess-silvesterfahrt-faellt-aus-id15618611.html http://www.ndr.de/nachrichten/hamburg/Feuer-auf-Adler-Princess-im-Hafen,feuer3288.html http://www.mopo.de/hamburg/polizei/am-fischmarkt-feuer-auf-passagierschiff--adler-princess--ausgebrochen-25316242