QUANTUM OF THE SEAS 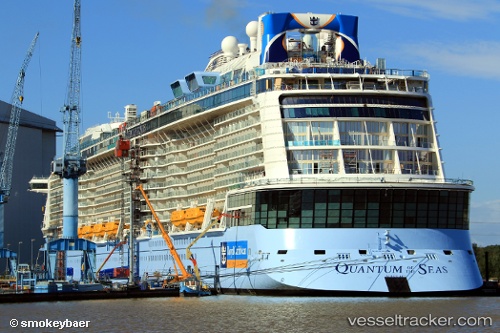 The 'Quantum of the Seas' returned back to Singapore seven hours early on Jan 21, 2021, after a passenger became ill due to an non-covid medical issue. An announcement informed all passengers they would be concluding the sailing earlier than expected, and the ship would be back in port by 8 p.m. local time. The ship was scheduled to return to conclude the sailing at 6 a.m. The patient was taken to a hospital in Singapore immediately for medical treatment. The 'Quantum of the Seas' is engaged in a series of "cruises to nowhere" from Singapore, which are limited to only residents of Singapore and have no port stops.

After almost a week of being idle in Singapore, the 'Quantum of the Seas' departed from the the Marina Bay Cruise Centre on Dec 14 to restart operations following a false positive test that temporarily shut her back down. after a passenger took a Covid-19 test onboard after not feeling well, and in an abundance of caution, the ship returned to port immediately and cancelled its next scheduled sailing. After three tests in Singapore, it turned out the original positive test onboard was incorrect and the virus was never a threat on that sailing.

A passenger who tested positive for COVID-19 aboard the 'Quantum of the Seas' forcing the ship to return to dock and nearly 1,700 guests to isolate, has been found not to have the virus, Singapore's health ministry said on Dec 10. Passengers the vessel were held in their cabins for more than 16 hours on Dec 9 after an 83-year old man, who sought medical help on the ship for diarrhoea, tested positive for COVID-19. When the ship returned to port, the passenger was taken to hospital where he took two further tests which did not reveal infection. A third negative test on Dec 10 led authorities to declare him virus free. All guests and crew that had come into close contact with the patient would no longer have to quarantine as previously instructed. Royal Caribbean welcomed the news and will continue to work with the government to refine its protocols. Royal Caribbean had cancelled a cruise leaving on Dec 10, but the city-state's tourism board said the pilot schemes, which offer round trips from Singapore and make no stops, could continue as planned. Authorities said the incident was a learning experience and validation of the safety protocols in place.