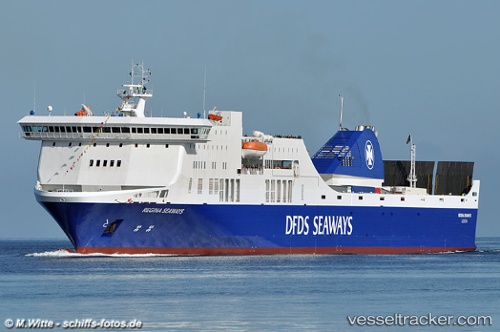 After the engine room explosion on Oct 3, the "Regina Seaways" was operating again after emergency repairs sin Klaipeda. But as one of the Wärtsilä main engines was still not working, the ship shifted from the Kiel-Klaipeda route to the service Klaipeda-Karslshamn due to its reduced speed. The ship sailed from Klaipeda on Oct 8 and berthed in Karlshamn for the first time on Oct 9. As a replacement, the "Athena Seaways" shifted on the Kiel-Klaipeda route with a first departure from Kiel on Oct 8. Permanent repairs aboard the "Regina Seaways" were expected to be carried out in winter when there would be less traffic on the routes.

In the morning of Oct 3 two tugs pulled the "Regina Seaways" from the ferry terminal in Klaipeda to a yard. The ship had entered port the previous evening after the sister ship "Athena Seaways“ had left the port. Then passengers and cargo were taken off before investigators of the Lithuanuan authorities and of the attending classification society boarded the vessel. The ferry „Victoria Seaways“ remained solely on the route Kiel-Klaipeda and will be supported by the ferries "Patria Seaways“ and "Maestro Universe“ the coming weekend. Reports with photos: https://www.soefart.dk/article/view/624619/regina_seawayspassagerer_blev_underholdt_af_symfoniorkester https://worldmaritimenews.com/archives/261798/fire-stricken-regina-seaways-reaches-klaipeda-port/ https://www.obzor.lt/news/n42978.html

Ferry REGINA SEAWAYS suffered an unclear kind of trouble in engine room in Baltcis sea while en route from Kiel to Klaipeda Lithuania, being southeast of Bornholm, at around 1340 LT Oct 2. What happened exactly, isn’t clear, probably explosion in engine room, alarm was set off in engine room, firefighting system was activated, ferry was disabled and probably, suffered a blackout – the ship went off AIS monitors at around 0430 UTC and reappeared at around 1530 UTC, being under way again, at a reduced speed of 14 knots, heading for port of destination Klaipeda. Ferry is escorted by at least 2 tugs and approaching Klaipeda. There are or were 335 passengers on board, some updates said passengers were evacuated, but official statements and situation in general tell otherwise, most probably they all remain on board. According to official statement, there was no fire, explosion also isn’t mentioned, alarm, activated firefighting system and sealed engine room (meaning engines were stopped) were the result of a dense smoke, cause by some malfunction. As of 1620 UTC Oct 2, situation looks to be under control, ferry sailing under own power, no injures and no damages were reported so far.