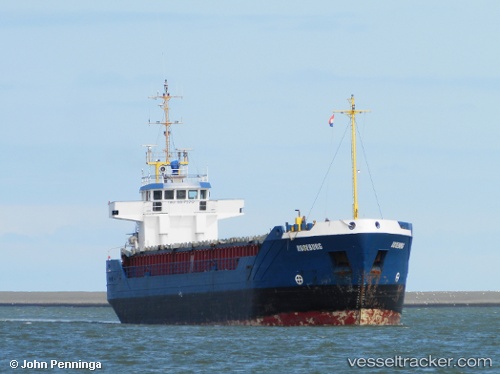 The "Roseburg", after having sailed from Riga on March 5, 2019, bound to Shoreham fully loaded with a cargo of timber including deck cargo encountered serious engine problems which could not be repaired at sea In the late afternoon of March 10 a contract was signed between Landfall Marine Contractors and the owners of thevessel to tow the ship towards Rotterdam. The Dutch AHTS "Isa" (IMO: 9688879), which was standby at the shipyard in Giessendam for maintenance, was immediately mobilized and headed to the casualty. All proper sea-fastenings were done on the "Isa" whilst sailing towards Hoek van Holland as there was NW wind of 40-45 kn and gusting 50-55 kn. Also gear was readied to connect to the "Roseburg" on deck as fast as possible and the crew of the "Isa" did not have to stay longer on deck in these harsh weather conditions longer than necessary, when connecting to the casualty. Waves had an average of 5 to 6 meters Twhen heading to the casualtie's position 45 miles NW of Hoek van Holland. On MArch 11 at daybreak the tug arrived at the location went on standby and closely monitored the situation. The weather and sea state were still to rough for the upcoming hours. The forecasts were showing light decreasing winds during the next few hours. At mid-afternoon there was a time window to make the first attempt on connecting to the "Roseburg", which, however, failed due to the stormy conditions. Immediately a second attempt was made, which was successful. After the towing connection was fixed, the "Roseburg" started lifting her anchor. 30 minutes later the convoy was underway towards Rotterdam. On March 12 at 06:30 a.m. the "Roseburg" was sefely berthed at the Keppel Verolme Shipyard. She sailed again after completion of repairs on March 23 at 2.30 a.m. The vessel finally arrived in Shoreham with its timber cargo on March 24 at 1.30 p.m. Video: https://www.linkedin.com/feed/update/urn:li:activity:6511084241336430592/

The whole night of Nov 6 the search for timber lost off the "Roseburg" the evening before on Kiel Roads lasted. Workers of the Technical Support Work (THW) recovered many of the 700 lost bundles which had a length of up to three meters off the Caterpillar Works in Friedrichsort. The ship had anchored off Kiel in the evening of Nov 5 in order to carry out some repairs. Due to a technical problem with the ballast water pumps the ship suddenly shifted to starboard during pumping operations. The vessel was in danger of capsizing, and an officer who was on the starboard bridge wing fell over board. He could be recovered 10 minutes later and was treated for hypothermia in hospital. He was expected to return on board on Nov 6. gesperrt. The anti pollution vessel "Scharhörn" and the emergency tug "Bülk" were alerted and tracked the about four tons driftwood. The Kiel Fjord was closed for ship traffic by the traffic control until the timber was so far recovered. The water police launched an investigation once the "Roseburg" was moored in the Scheer Port of Kiel, thereby concentrating on the technical installations responsible for the ship's stability. The remaining wood was to be surveyed by the insurance and to remain in Kiel or be stowed again for the further transport to England. German reports and photos: http://www.ndr.de/regional/schleswig-holstein/frachter279.html http://www.abendblatt.de/region/schleswig-holstein/article121594289/Holzfrachter-verliert-seine-Ladung-in-der-Kieler-Foerde.html http://www.kn-online.de/Lokales/Kiel/Havarie-auf-der-Foerde-Frachter-Roseburg-fast-gekentert http://forum-schiff.de/phpBB3/viewtopic.php?f=2&t=23#p97129

On Nov 5, 2013, the „Roseburg“ was in danger of capsizing off Friedrichsort in the Kiel Bight. The ship had developed a strong list around 5 p.m. on Holtenau Roads. The ship tilted so fast that the whole deck cargo of timfer splashed into the water. The crew was able to stabilize the ship. The anti pollution vessel "Scharhörn“ and an emergency tug attended and secured the drifting Wood which was expected to take the whole night. The vessel which had been enroute from Riga to Barrow-in-Furness was moored in the Scheer Port at the North Jetty at 8.30 p.m. and detained.