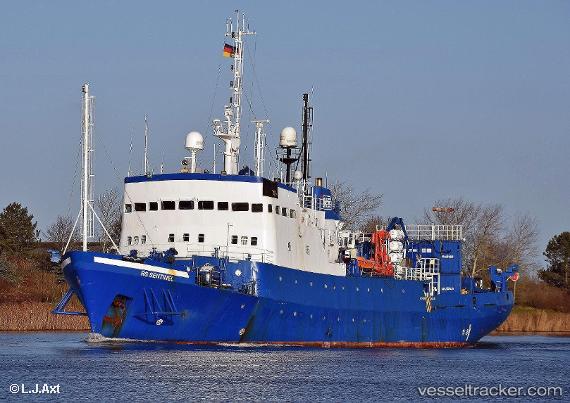 The investigations of the 'RS Sentinel' on the wreck of the ferry “Estonia” have been completed. The research ship was now on its way back to Eemshaven with an ETA as of Oct 4. With the help of an underwater robot it was possible to photograph almost the entire wreck of the ferry. The next step is to systematize the collected material before handing it over to experts for further studies. The expedition was carried out on behalf of the survivors' organization of the victims of the ship disaster. An official investigation by state authorities took place at the same time.

Dives conducting initial exploratory work as part of a private sector investigation into the wreck of the ferry 'Estonia', had to be cut short in the afternoon of Sep 26 after just a few minutes, due to poor visibility. The completely murky water prevented them from making any progress beyond the safety line. Divers were only able to spend minutes on the sea bed. The private dive is funded by the SA Mare Liberum foundation and is supported by the Postimees Group. The expedition team arrived on-site on Sep 22 and initially used sonar and submarine robots, from the surface, with volunteer divers from Germany making the first dive attempt in the afternoon of Sep 26. The dive went to a depth of 80 meters, and while visibility had initially been good, it was as expected poor once nearing the wreck. A remote-controlled dive robot followed on from the divers and made more significant findings. Just over 40 people are involved in the expedition, nearly half of them crew members, while six media personnel were included in the total number.

The 'RS Sentinel' has reached the location where the ferry 'Estonia' sank on Sep 28, 1994, and is starting an examination. The relatives of the MS Estonia victims announced in early September they had established a foundation – Mare Liberum – to support their expedition and privately investigate the wreck of 'Estonia'. The foundation’s manager, Margus Kurm – a former state prosecutor of the Republic of Estonia and from 2005-2009, the head of the committee for the investigation of the sinking of MS Estonia – said that although numerous different investigations have been carried out, they have not been able to give the survivors and close relatives of the deceased exhaustive answers regarding the reason why Estonia perished. The expedition will look answers for seven questions: why and when did the visor disconnect from the ship?; did the ramp completely open before the sinking of the ship?; what exactly are the damage locations on the right deck, when and what caused such damage?; why and when did intermediary walls of the abaft and car deck of the ship become damaged?; does the hull of the ship have any more damaged locations of which we do not know?, what objects are located around the wreck and in the assumed trajectory of the sinking of the ship, and what is their connection with the sinking of the ship?; how exactly did different parts of the ship get filled with water? The diving support vessel plans to conduct underwater research and investigate the shipwreck on the sea bottom. The ship has various sonars, two groups of underwater robots and four divers with the necessary research and recording equipment. After gathering evidence, the entire collected material will undergo a thorough scientific analysis. Additionally, a 3D model of the bow visor of Estonia has been prepared, which now makes it possible to study damage of the visor from the distance. The plan is to cover the entire area and to map the location of the wreck and objects that surround it. After tha the first preparatory examination with an underwater robot will be conducted, the goal of which is to identify the exact position of the wreck and to find out whether there is anything around it that requires a more detailed examination.