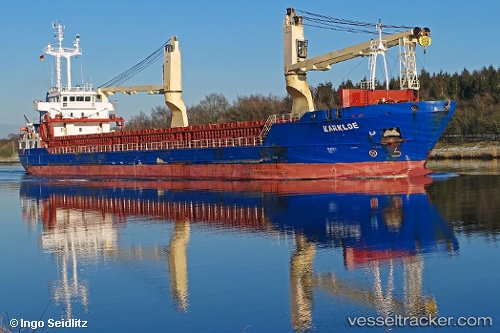 On Dec 16 towage of the 'Karkloe', which had been anchored in the bay of Saint-Brieuc with 4000 tonnes of ammonium nitrate, to Rotterdam finally started. The freighter had sailed from Sweden on Nov 27 bound to Mauritania, but after suffering damage on its propulsion was to be taken to Rotterdam to make the necessary repairs. Due to adverse weather the ship was moored in the Bay of Saint-Brieuc on Dec 9 and secured by the tug 'Argonaute' since. On Dec 15, thanks to improved weather conditions, the tug 'Pegasus' (IMO: 9433743) arrived from Rotterdam and was able to establish a towing connection. Late on Dec 16, the convoy was able to set sail for the Netherlands, escorted by the 'Argonaute' until a position north of the Roches Dover plateau. On Dec 19 the 'Karkloe' reached Rotterdam and was berthed at the Damen Shiprepair Yard in the Wilton Port at 9.35 p.m. for repairs. She left the port again on Jan 7 at 10 p.m. and headed toNouadhibou as next port of call with an ETA as of Jan 29. French report with photos: https://france3-regions.francetvinfo.fr/bretagne/cotes-d-armor/saint-brieuc/karkloe-au-mouillage-baie-saint-brieuc-va-finalement-pouvoir-rejoindre-rotterdam-1763785.html

The 'Karkloe', which was loaded with 4.000 tons of ammomium nitrate, started to drag anchor in the night of Dec 8 after the weather deteriorated. The tug 'TSM Kermor' was not powerful enoughto stabilize the vessel in its position, and the emergency tug 'Argonautoe' (IMO: 9269518) was deployed and managed to get the vessel under control by taking it in tow at 3.30 a.m. on Dec 9, preventing its further drift towards the French coast. On Dec 12 the ship was still at anchor in the Bay of Saint-Brieuc (Côtes-d'Armor), 3,5 nautical miles from the coast off Plouézec, and waiting for suitable weather to be towed to Rotterdam for repairs. The 'Argonaute', chartered in the night of Dec 8 to stabilize the ship on its anchorage, remained on standby. The 'Karkloe' will remain sheltered in the bay of Saint-Brieuc pending calmer weather, while a new gale has been announced on the west of France. Once the weather permits, the ship will be towed to the Netherlands.

Disabled freighter under tow to Brest