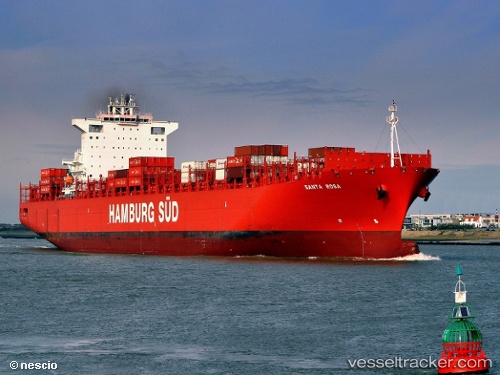 On Jan 26, 2014, a fire broke out aboard inside a container loaded with charcoal aboard the "Santa Rosa" off the German coast in the Northsea. The box was stored on the upper deck of the vessel which had a crew of 24 from Poland , Ethiopia, Ukraine, the United Kingdom and the Republic of Kiribati as well as two passengers from Germany and Great Britain. The ship had left the Northfleet Hope Container Terminal in Tilbury on Jan 25 around 6 a.m. The fire was put out by the crew. The traffic control center (VTS) Cuxhaven informed the Casualty Command in Cuxhaven at 5:30 a.m. which sent a fire fighting unit consisting of four men as a precaution which was taken to the container ship on board the anti pollution vessel "Neuwerk". After it became known that two more container layers were stored above the charcoal container the Casualty Command was requested to take over the operational control at 11 a.m. A pilot boat transferred the firefighters on the "Santa Rosa" to explore the situation. The exploration with thermal cameras revealed that the charcoal loaded container was completely flooded after having been penetrated with a fire extinguishing lance, so it was assumed that the fire was out. The "Santa Rosa" continued to Hamburg with the fire fighting unit remaining on board as a fire watch. The ship was escorted by the "Neuwerk" on its way and docked at the Athabasky Quay in Hamburg at 8 p.m. The operational control was transferred to the responsible authorities in Hamburg then. Local fire fighters controlled the cargo for remaining hotspots once the ship was moored. German reports with photos and video: http://www.feuerwehr.de/news.php?id=10166 http://www.sat1regional.de/justiz-und-polizei-video/article/feuer-auf-schiff-santa-rosa-loest-grosseinsatz-der-feuerwehr-aus-136143.html

In October 2012 Damen Shiprepair Rotterdam (DSR) won the contract for installing the first Becker Twisted Fin® on 7 container vessels of the fleet of Hamburg (Germany) based liner shipping company Hamburg Süd. To complete the project in time, the vessels were routed in such a way that they could each be dry-docked for a maximum of 6 days every consecutive week. All ships have now been re-delivered. The first vessel starting the cycle, MV SANTA CATHARINA, was expected the 30th of December 2012. However, this vessel was operationally delayed, which reduced the available time with three days. Due to an intense work preparation, with a good and smooth cooperation between the owners and makers, and an efficient method of fitting each prefabricated Becker Twisted Fin to its vessel, DSR managed to re-deliver each vessel just before the next vessel was ready for docking. The last vessel, the MV SANTA ROSA, was re-delivered in the last week of February. Press release: http://www.damenshiprepair.com/en/news/2013/03/damen-shiprepair-rotterdam-re-delivers-seven-vessels

The port of Buenios Aires yesterday saw the christening of the container vessel Santa Rosa, the latest in a series of box ships each with a slot capacity of 7,100 TEU and fitted with 1,600 reefer container plugs apiece, built for Hamburg Süd. The ship is the sixth vessel in a series of ten identical ships which are some of the largest ever built for the freight carrier all due for delivery by the summer of 2012. The ceremony took place in Buenos Aires in the presence of 250 customers and guests from politics and business and the sponsor of the Santa Rosa was Sabine Vespermann, wife of Dr Arnt Vespermann, Member of the Executive Board of Hamburg Süd. The 93,000 tonne ship, named after the Argentinian town in the province of La Pampa, has already been running on the New Good Hope Express service between Asia and the South Africa and East coast of South America since her delivery at Daewoo Shipbuilding & Marine Engineering Co. Ltd. (DSME) in Korea in July.