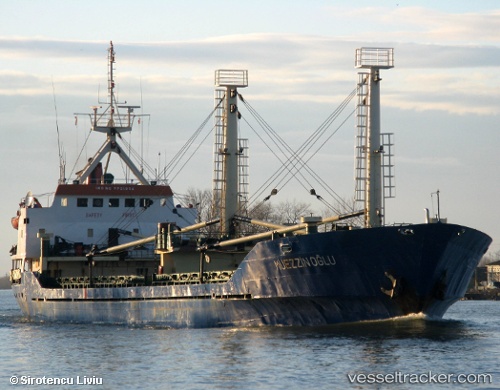 The 'Adam K' has left the port of Almeria on Feb 20, 2020, at 1.30 p.m. after more than two years. The ship, which was sold in a public auction in May 2019, left the Levante Dock after undergoing some maintenance work. It was bound to Alexandria with an ETA as of Feb 28. The vessel had been intercepted by Customs Patrol and Civil Guard patrols in August 2017 in international waters off the Alboran Sea, with about 16 tons of hashish on board. On Feb 19, 2019, the auction was announced. The sale was authorized by the Government Delegation for the National Drug Plan, once awarded to the State by a final decision of the National Court. After this auction - carried out by the Port Authority of Almeria the former 'Lady Boss' was awarded to Abdul Karim Kartich for 201,000 Euros (excluding taxes). Spanish reports with photos: https://almeria360.com/cabeceraempresas/20022020_el-buque-adam-k-abandona-el-puerto-de-almeria-despues-de-mas-de-dos-ano_192650.html https://portalportuario.cl/buque-mercante-deja-el-puerto-de-almeria-tras-dos-anos-amarrado-por-trafico-de-droga/

Auctioned vessel due to leave Alméria

The 'Lady Boss' - which was auctioned last spring - is still moored at the Levante dock of the port of Alméria, while it was prepared to leave after more than two years. The vessel was intercepted by Customs and Civil Guard patrols in August 2017 in international waters of the Alboran Sea, when it transported about 16 tons of hashish. On Feb 19, 2019, it was put up for auction. Its sale was authorized by the Government Delegation for the National Drug Plan, once awarded to the State by a final decision of the National Court. The auction wascarried out by the Port Authority of Alméria, and the 'Lady Boss' was sold to Abdul Karim Kartich for 201,000 Euros (excluding taxes). Once the commissioning works have been completed and the authorization of the Maritime Captaincy has been received, the ship may leave the Levante dock, where it has been moored since the end of November 2018. Spanish report with photo: https://almeria360.com/empresa/11122019_lady-boss_190314.html

The Port Authority of Almería has awarded in public auction the 'Lady Boss', which was intercepted in August 2017 with 16 tons of hashish and 13 crew on board in the waters of the Alboran Sea, for 201,000 Euros to a private buyer. The winner of the ship, which went out to auction for 190,400 Euros without VAT, has a period of one month - until the first week July - to pay the amount and sign the contract, being able to dispose of the vessel from that moment.