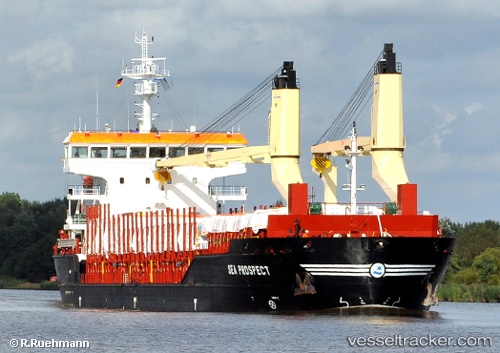 On Sep 3, 2019, around 5 p.m. the "Sea Prospect", enroute from Kantvik to Casablance, was in collision with the Dutch bulkcarrier "Sagasbank", which was already berthed, inside the the New Southern Lock of the Kiel Canal in Brunsbüttel. The "Sea Prospect" slammed into the stern of the "Sagasbank". Both ships suffered dents and scratches above the water line. A wind gust had caught the "Sea Prospect" upon entering the lock which caused the accident. She continued the voyage at 6.15 p.m. with an ETA as of Sep 6, 6 a.m. The "Sagasbank" left the lock at 6 p.m. and continued the voyage from Figuaira da Foz to Gavle with an ETA as of Sep 6, 8 a.m.

Man fell over board on ice

On Feb 2, 2018, at 8.35 a.m. a Russian crew member fell over board the "Sea Prospect" in Piteå at Haraholmen. Emergency services and ambulance were mobilized to the site. The man had worked on the ship and climbed on a ladder as he slipped and fell five to seven down onto the ice. His colleagues managed to lift him up again, using a crane. When the ambulance staff arrived, the man was on the dock. Ambulance staff worked intensively before he was taken to Sunderby Hospital or Norrland University Hospital in Umeå. Swedish report with photo: http://norran.se/nyheter/blaljus-nyheter/man-har-ramlat-fran-fartyg-i-pitea-larm-om-drunkning-971403

The "Sea Prospect" suffered cylinder damage and engine failure on June 20, 2015 northwest of the Cotentin, in the Casquets traffic separation zone. The disabled vessel started to drift in the English Canal north of Guernsey. As the crew was unable to fix the problem with own means, on June 21 a towage contract was signed, and the "Sea Prospect" was taken in tow by the French salvage tug "Abeille Liberté" in the afternoon. Winds and currents were making the convoy slow. The ship was pulled to Cherbourg anchorage and moored in the early morning of June 22. The "Sea Prospect" was en route from Porto Empedocle to Grenaa.