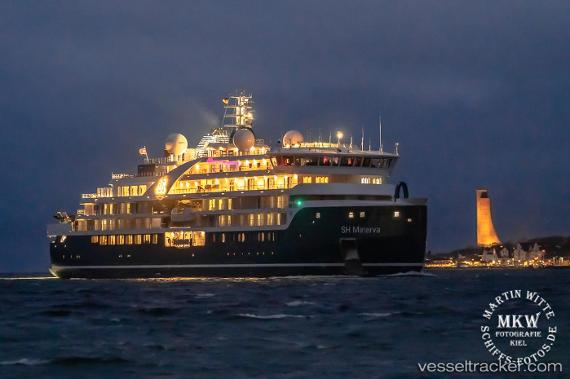 The 'SH Minerva' boarded the crew of the Antarctic Quest 21 expedition recently. The eight had been battling against the logistics of getting back to Ushuaia, dealing with fierce storms that hampered their movement while new Covid regulations introduced in Argentina had complicated their extraction plans. The team was transported to Antarctica in mid-December aboard the expedition cruise ship 'Sea Venture' to begin a planned science and exploration program on the Antarctic Peninsula. The team planned to travel over and along the spine of the Antarctic Peninsula, putting in place scientific equipment that will transmit data used in climate research. The second phase of the expedition called for data gathering for scientific research of climate change, meteorology, geology, and glaciology. They were gathering snow samples to evaluate long-range atmospheric transport of microplastic contamination, as well as measuring UVB radiation levels to establish the effect of ozone depletion, measuring snow deposition rates, and taking meteorological observations. They also conducted a special ceremony to mark the hundredth anniversary of Sir Ernest Shackleton’s final voyage to the continent. The expedition team had spent five weeks engaged on the Antarctic Peninsula when it became clear they would have to attempt an early return. The 'SH Minerva' arranged to come to their assistance. The issues leading to our emergency extraction started on Jan 3, 2022, referred to the increasing problems related to COVID-19 travel restrictions. The pick up from the ice was planned for Jan 27, and all planning assumptions were based on that date. As the time passed, they learned that other operators, such as Hurtigruten, were canceling their season of activity in the Antarctic. Ultimately, the firm that had provided transport to Antarctica informed the expedition that it would not be able to make the planned pickup. Swan Hellenic, the operators the 'SH Minerva', decided to assist them back to Ushuaia then with an ETA as of Jan 28. Report with photos: https://maritime-executive.com/article/cruise-ship-extracts-expedition-in-risk-of-being-stranded-in-antarctic

On December 3, 2021 Swan Hellenic took over their first of three new expedition cruise ships from Helsinki Shipyard: the SH MINERVA (IMO 9895240), 113 meters long with a passenger capacity of 152. The ship had been christened in Helsinki already at the end of November. Immediately after the takeover, Swan Hellenic began to transfer their new cruise liner to the Canary Islands. On December 5th, a first call was made in Kiel to take over equipment, the next day she made the passage of the Kiel Canal. A sister ship, the SH VEGA, is already under construction and is scheduled to be completed in 2022. Incidentally, the SH MINERVA is already the second cruise ship to be delivered in Finland this month. The COSTA TOSCANA had been delivered in Turku just one day earlier. Full article + video: https://www.cruisedeck.de/helsinki-shipyard-liefert-sh-minerva-ab/

First of three new ships ready for Swan Hellenic The SH MINERVA, the first of three new expedition cruise ships for Swan Hellenic Cruises, was christened in Helsinki these days. The celebration was a private ceremony at the Helsinki Shipyard. In addition to high-ranking representatives from the shipyard and the cruise line, as well as godmother Johana Mäkelä, Finland’s first professor of food culture, her husband Juhana Vartiainen, mayor of Helsinki, attended as well. Full article: https://www.cruisedeck.de/sh-minerva-getauft/