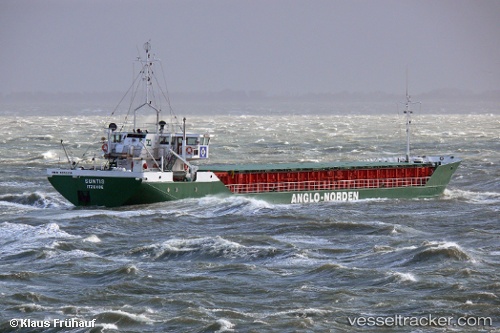 The "Suntis" reached the port of Brunsbüttel in the morning of June 2 with a replacment crew, after the authorities in Goole had released the ship on May 31. They did not find defiencies, so the ship was allowed to sail again. In Brunsbüttel, representants of the Federal Bureau of Maritime Casualty Investigation and the water police launched an own investigation which also came to the result that the death of the three crew members was caused by a lack of oxygen in the cargo hold which had not been ventilated properly before the men entered it, ignoring the warning signs. In the evening of June 3 the ship left the port again, bound for Karlshamn.

Riddle surrounding death on board solved

The three men who died aboard the "Suntis" were apparently suffocated. They died as a result of lack of oxygen in the cargo hold of the freighter. Measurements in the hold had shown a very low oxygen content. The ship was fully loaded with pallet wood. The wood had been taken aboard in Riga and Gdynia. Because it was still wet, it probably consumed high amounts of oxygen. This could have reduced the amount of oxygen in the cargo space which should have been entered only with appropriate measuring instruments.

Police continued to investigate whether three men aboard the "Suntis" could have died from carbon monoxide poisoning at Goole docks. The men, Gerd Jescheniak, 60, Ferrer Punongayan, 33, and Jonathan Sanosa, 33, were working on board the "Suntis" when they fell ill. They were taken to Hull Royal Infirmary but died later that day. Their deaths were not believed to be suspicious and officers are investigating a number of theories. The Humberside Police could not confirm or deny whether the men, all crew members, had died from carbon monoxide poisoning. They were called to the docks on May 26 at 7 a.m. by the ambulance service in relation to three male crew members who had been taken ill on board the vessel. They were now working with the Maritime Agency to establish what caused their death. Mothing fell on them while they were working and they didn't injure themselves in any way. Also there was no risk to the general public. The "Suntis" was believed to have had five crew members on board when it docked at Goole on May 26. Two Goole dock workers were believed to have helped the three men after being alerted by another crew member of the "Suntis". The workers were taken to hospital as a precautionary measure but later released. There was no estimation on how long the investigation would take. The "Suntis" docked in Goole on May 24 after it left Frederikshavn on May 21 following stops in Riga and Gdynia. The Health and Safety Executive has offered specialist support to police and the Marine Accident Investigation Branch, but it was not directly involved in the investigation. Reports with photos: http://www.hulldailymail.co.uk/men-dead-Goole-Docks-incident/story-21147828-detail/story.html#QKyLScMXdpqstmyE.99 http://www.bbc.com/news/uk-england-humber-27601923