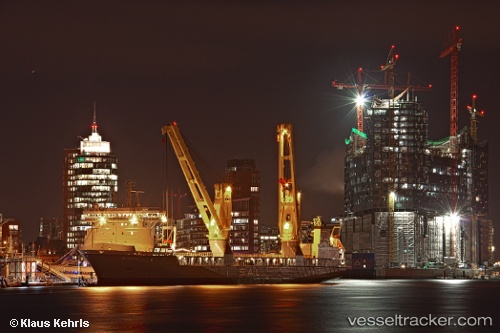 Five days after the loading accident in Rostock the "Svenja" was released by the authorities and left the port on Nov 5 at 6,40 p.m. The ship headed to Aalborg, where it was expected on Nov 6 at 11 a.m. The 800-ton-mono pile has been recovered in the night of Nov 2 and stored ashore. The ship had suffered only slight damage as the pile crashed onto another one on deck which was more affected.The investigations were still going on, the damage was estimated to be several hundred thousand Euro. German report with photos: http://www.ostsee-zeitung.de/Mecklenburg/Rostock/Rostocker-Seehafen-800-Tonnen-Stahlrohr-im-Hafen-geborgen

On Oct 31, 2018, around 8 p.m. 1.000-ton-foundation pole of a wind turbine slipped from the crane slings and crashed in the Overseas Port of Rostock while being loaded onto the "Svenja" at berth 10. One worker suffered slight injuries, the damage was about half a million Euros. A part of the pole penetrated the quay area, another the deck of the "Svenja" at port side. A crane was called to remove the debris on Nov 1. The "Svenja" had arrived from Teesport on Oct 30 at 7 a.m. and was destined back to Teesport. German reports with photos: https://www.nnn.de/lokales/rostock/Seehafen-Rostock-Stuetzpfeiler-rutscht-ab-halbe-Million-Schaden-id21513062.html https://www.ndr.de/nachrichten/mecklenburg-vorpommern/Rostock-Stahlrohr-soll-geborgen-werden,stuetzpfeiler100.html http://www.ostsee-zeitung.de/Mecklenburg/Rostock/Unfall-im-Rostocker-Seehafen-1000-Tonnen-Stuetzpfeiler-stuerzt-auf-Kaikante

October 25 - SAL Heavy Lift's freighter, Svenja, recently called at the Port of Rotterdam to deliver 14 new vessels built by the Damen Shipyards Group at its facilities in Asia. Svenja moored at the Rotterdam Offshore Group's facility in Waalhaven to discharge eight pontoons and six tugs, all intended for sale. This concluded a journey that started at the end of August in Shanghai, where the ship loaded the eight pontoons, before picking up the six tugs in Vietnam. http://www.heavyliftpfi.com/news/sal-carries-damen-vessels.html