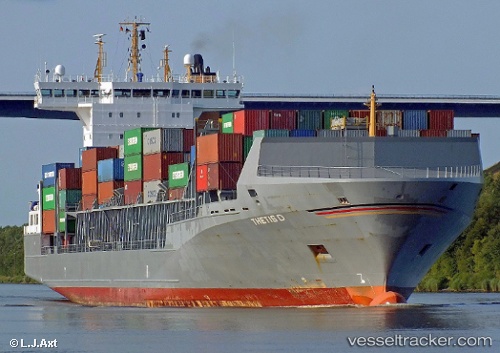 Enroute from Hamburg to Stockholm the "Thetis D" allided with the new southern lock in Brunsbüttel upon entering it on Dec 31, 2018, at 08:45 a.m. Both lock and ship were said to have suffered damage. The accident was investigated while the ship was inside the lock. At 10.45 a.m. it continued the eastbound voyage.

On Jan 7 the recovery of five containers lost by the "Thetis D" from the beach of Wangerooge which had started on Jan 6 was to be completed. The planks which had been swept across the beach had to be collected. The driftwood as well as the debris of the containers was loaded onto the salvage ship "Störtebeker" and was due to be taken to Norddeich port on Jan 8. Then it was to proceed to Spiekeroog, where four containers grounded, or Norderney and Langeoog to recover the other grounded containers. German report with photos and video: http://www.ndr.de/nachrichten/niedersachsen/oldenburg_ostfriesland/Bergung-der-Wangerooger-Container-fortgesetzt,container476.html

The owners of the "Thetis D" have developed salvage plans for the 11 containers which fell over board from the ship on Dec 26 and drifted ashore on Wangerooge, Spiekeroog, Langeoog and Norderney. Five boxes were still missing and presumed sunk. A company was contracted to remove the boxes from the beaches from the water. The wooden plans stored inside will be removed, the containers dismantled and transported away. Five boxed grounded on Wangerooge, four on Spiekeroog, at least one each on Langeoog and Norderney. The work has to be completed until Jan 13, 2017. The "Thetis D" has left the port of Rotterdam where she docked on Dec 27, on Jan 3 at 7 a.m. bound to Ust-Luga, ETA Jan 6. German reports with photos and video: http://www.nwzonline.de/blaulicht/selbstbedienung-verboten_a_31,2,651502366.html http://www.ndr.de/nachrichten/niedersachsen/oldenburg_ostfriesland/Gestrandete-Container-werden-uebers-Wasser-geborgen,container456.html https://www.kreiszeitung.de/lokales/niedersachsen/sturm-spuelt-container-strand-wangerooge-7176133.html http://www.ndr.de/nachrichten/niedersachsen/oldenburg_ostfriesland/Sturm-hinterlaesst-auf-Wangerooge-grosse-Probleme,container438.html