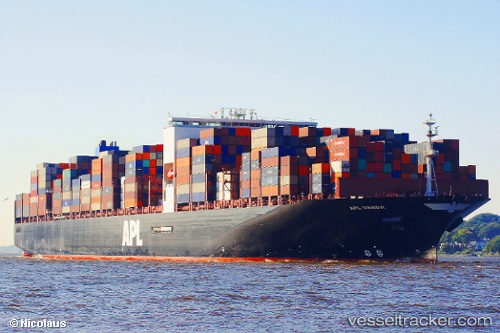 Mega boxship underway to Hamburg after checks have been completed

On Feb 16 around 5 p.m. the "APL Vanda" has left Southampton dock bound for Hamburg, ETA Feb 17, 11 p.m. She was being accompanied by three tugs as a precaution. After returning to Southampton, the vessel had initially been expected to leave for Hamburg after precautionary checks but was delayed to allow divers to check for damage to the hull.

DP World Southampton, which operates container terminals at the port of Southampton, expected the "APL Vanda" to sail again on Feb 16 at about 12:30 GMT. The ship was next destined to Hamburg, scheduled ETA had been Feb 16, after checks. The vessel was also being thoroughly examined before being allowed to proceed.The departure was, however, delayed to allow divers to inspect the hull after the grounding on West Bramble Bank. There had been no injury or pollution arising from the incident. APL was working closely with the relevant authorities and stakeholders on the investigation.

The "APL Vanda", stuck on a sand bar between Cowes, the Isle of Wight and Southampton was refloated by the tugs „Lomax“, „Phenix“, „Apex“, „Svitzer Ferriby“, „Svitzer Alma“, „Svitzer Sarah“, „Svitzer Eston“ and „Svitzer Bargate“ on Feb 13 short past midnight and the engines started. The ship was towed to the Southampton Container terminal at 3 a.m.on Feb 14. Red Funnel’s 11.15 p.m. Cowes to Southampton sailing and the 10.45 p.m sailing from Southampton to Cowes were cancelled and a 250 meter exclusion zone was set up. Several ships had to wait at Spithead and in the West-Solent until the ship was freed. Also the "CMA CGM Samson“ could not sail to Rotterdam as scheduled. Reports with photos and video: https://www.youtube.com/watch?v=4HaVwWd-6Ss http://uknip.co.uk/2016/02/13/hazardous-cargo-ship-runs-into-trouble-on-the-bramble-bank-off-the-isle-of-wight/ http://www.dailyecho.co.uk/news/14275498.Massive_container_ship_runs_aground_in_the_Solent/ http://www.itv.com/news/meridian/update/2016-02-14/update-huge-container-ship-freed-after-running-aground/ http://www.bbc.com/news/uk-england-hampshire-35572894 http://www.islandecho.co.uk/news/container-ship-runs-aground-off-cowes