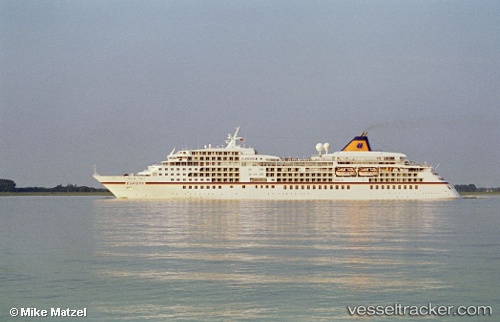 The body of the missing Kai Wünsche was drifted onto the beach of Texel island on Aug 24., 10 days after hee went missing from the 'Europa'. The Dutch police confirmed his death after an investigation. There was no suspicion into his death. The police investigations were thus finished.

No suspicion in case of missing multi-millionaire Wünsche

On Aug 17 the 'Europa' berthed in Antwerp, one day after the multi-millionaire and fashion mogul Kai Wünsche (81) was lost over board in the North Sea. The 81-year-old was on the board the whole way from Bordeaux to Kiel. When the cruise ship passed the Dutch island of Texel, his husband reported him missing. Immediately the captain turned the ship around, alerted the Dutch Coast Guard and started looking for the missing person. The ship was also searched without result. The Coast Guard deployed a helicopter, an aircraft and five lifeboats. Conditions were difficult, the sea was rough and the waves were about five meters high. After the stop, the ship resumed the route. The missing person's travel companion was taken care of. There was so far no evidence of an accident or a third-party fault. The man was said to have suffered from depression for a long time. Wish had built a fashion empire over the years with the fashion brands Joop! and Cinque, but the fashion division went bankrupt in 2002. Furthermore, Wünsche is the owner of several luxury properties in Hamburg.

On Aug 16 the Dutch Coastguard started a major search for a man in his eighties who fell overboard 26 meters deep from the ''Europa' approximately 10 nm north-west of Texel, while the ship was en route from Hamburg to Antwerp. The entire ship has since been searched and the person has not been found. The Coast Guard has established a search area of ​​about 20 square miles on the basis of current and wind data and deployed five lifeboats from the KNRM, the SAR helicopter from Den Helder, the Coastguard vessel 'Guardian' and a Coastguard aircraft. Ships in the area were also requested to join or to keep a good lookout. The SAR helicopter from the Maasvlakte has also been alerted and proceeded to Texel to refuel, then it flew to the search area and released the SAR helicopter from Den Helder, so that it could refuel on Texel. Then they searched the area together. Wave heights on scene were 5-6 meters. At 5.55 p.m. the Coast Guard ended the SAR action and stood down the units. The chance of survival was over and the entire area was searched as best as possible under the weather conditions. Report with photos: De Kustwacht heeft de grote zoekactie naar een man die overboord sloeg van het Duitse cruiseschip MS Europa in de buurt van Texel gestaakt. De man van in de 80 viel van een hoogte van 26 meter in het water. Dutch report with photos: https://www.knrm.nl/nieuws/zware-zoektocht-naar-over-boord-geslagen-passagier-van-cruiseschip