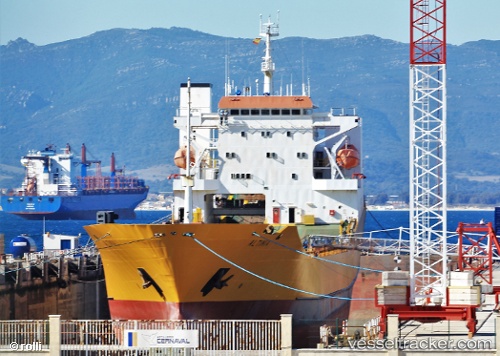 A new shipping line was launched in Italy on April 19, 2018 and is due to start operations early next month with rorovessel Altinia. ProCargo Line will be operating regular connections between the Italian ports of Marina di Carrara and Cagliari with Sousse, Sfax and Zarzis in Tunisia.

The "Altinia" was towed into the port of Djibouti after encountering engine problems which left the ship adrift in the Gulf of Aden on July 23, 2015. The EU Naval Force flagship ESPS "Galicia", whilst conducting counter-piracy patrols in the region responded to a mayday call from the cargo ship. As reported by the ship’s crew, the vessel had developed engine problems and was drifting at sea. The ESPS "Galicia" sailed close to the "Altinia" to provide protection from any potential pirate attack, whilst spare engine parts were acquired from a Combined Task Force 151 warship that was in the vicinity. Soon afterwards, the Spanish Navy ship handed over the protection of the "Altina" to the EU Naval Force warship ITS "Libeccio", because of other operational counter piracy tasking in the Gulf of Aden. The ITS "Libeccio" towed the vessel to Djibouti for further inspection and repairs, as it was assessed that it requires specialized technical assistance in port. Report with photos: http://eunavfor.eu/operation-atalanta-warships-assist-stricken-italian-merchant-vessel-in-the-gulf-of-aden/

The "Altinia" suffered an engine room fire in Gulf of Aden on May 6, 2014, while en route from Jebel Ali to the Suez Canal. The crew of 16 remained uninjured and abandoned ship. They were rescued by the Chinese military vessel "Chaohu" and later transferred onto the "Jolly Diamante" and taken to Djibouti. The rescue operations were coordinated by the Italian MRCC of the Coast Guard in Rome. The ship, from which white smoke emerged, was to be towed to the nearest seaport. Ten of the crew returned home . The captain, the chief engineer , the second officer and a deckhand boarded the Italian Navy ship "Mimbelli" to be able to assist in the salvage. The "Altinia" went adrift in position 12 23N 046 00E and was 55 nautical miles SE of Aden. Italian report with photos: http://www.ilfatto.net/news/news/3574-naufragata-nel-golfo-di-aden-nave-con-molfettese-a-bordo http://www.quindici-molfetta.it/incendio-su-una-nave-nel-golfo-di-aden-il-molfettese-felice-sgherza-a-bordo-illeso-l-equipaggio_31407.aspx