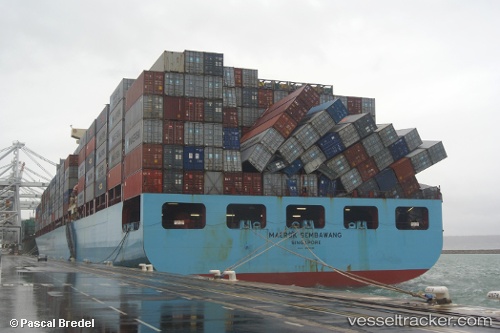 On July 17, 2019, the "Maersk Sembawang" was stopped due to the malfunctioning of its main machine and excessive emissions after the traffic control of the port of Algeciras detected an excessive exit of smoke from the main engine. The Maritime Captaincy imposed a guarantee of 20,000 Euros for the release of the ship which was heading to the Juan Carlos I pier of the port of Algeciras. The shipping company immediately rectified the detected problem as required. The ship berthed in Algeciras on July 18 at 2.15 p.m. and continued the voyage on July 19 at 1.15 p.m. to Valencia, where it arrived on July 21 around midnight. Spanish report with photo: https://www.europasur.es/algeciras/buque-detenido-contaminacion-Bahia_0_1374762805.html

Largest container vessel to call at Port of Cochin

On Nov 20, the "Maersk Sembawang" returned to service, two weeks after diverting to Le Havre because it had lost 26 containers in a storm. The vessel left the Quay Bougainville in Le Havre after a lengthy operation to unload damaged containers and boxes that had shifted dangerously on an aft deck. On Nov 24 at 6 p.m. it reached Zeebrugge without furhter disturbances.