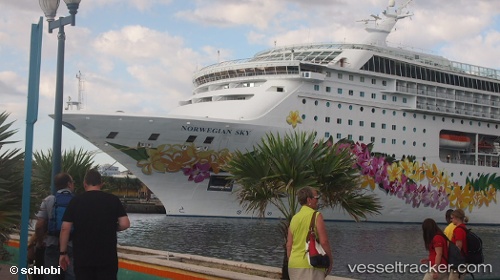 Kevin Rohrer's and his girlfriend's vacation ended abruptly in Havana, Cuba after their cruise ship left without them on a recent four-night Norwegian Cruise Line sailing in the Caribbean. According to News.com.au, the American couple returned to the dock more than an hour ahead of what they thought was the Norwegian Sky's 5 p.m. departure time only to find the ship was already gone "It was a frightening situation. We were devastated," Rohrer said in his complaint to the cruise company. "We exchanged money and we took a taxi to the airport. American Airlines told us they wouldn’t take a credit card and quoted us 472 pesos ($465). We didn’t have that much money." The couple managed to book a flight home and Rohrer has since contacted consumer rights group Elliott Advocacy.

The US Coast Guard medevaced a man from the "Norwegian Sky" 64 miles southwest of Key West on July 4, 2018. Medevaced was Miguel Negron, 79. At 12:51 p.m., the Coast Guard Key West were contacted by the ship, stating Negron was suffering from chest pains and was in need of emergency care. Watchstanders launched an MH-65 Dolphin helicopter crew from Coast Guard Air Station Miami. The aircrew arrived at 4:45 p.m., hoisted Negron and transported him to Jackson Memorial Hospital for further care. Report with video: http://coastguardnews.com/uscg-medevac-from-norwegian-sky/2018/07/05/

When Norwegian Sky pulled into Havana this morning (May 2), it became the first ship in Norwegian Cruise Line's fleet to visit Cuba, a country long off-limits to American travelers because of a long-standing embargo. The ship arrived to port at about 8 a.m., and passengers snapped photos from the top decks and waved at Cubans watching from ashore. To commemorate the arrival of the ship, a ceremony took place in Havana's terminal, in which Norwegian Cruise Line Holdings president and CEO Frank Del Rio cut a red ribbon along with top port executive Angel Diaz Albertini Alonso. http://www.cruisecritic.com/news/news.cfm?ID=7784