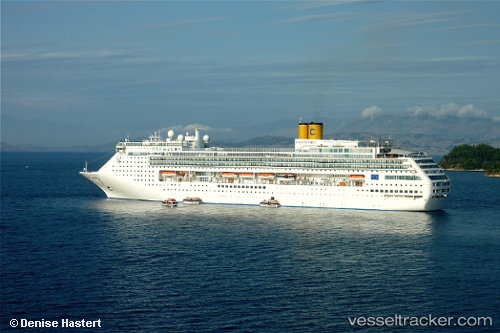 Cruise ship to be broken up in Piombino

On June 23 the 'Costa Victoria' arrived in Piombino for recycling. She will b ebroken up at the Piombino Industrie Marittime yard, a subsidiary of the Industrie Navali Holding in Genoa which is a joint venture of San Giorgio del Porto and T. Mariotti in Genoa. The Carnival Corp. had announced to dispose of six of its 104 ships within the next 90 days.

Costa Crociere has sold the 'Costa Victoria' to the San Giorgio del Porto Group: the ship would have been sold to Genova Trasporti Marittimi, a company controlled by the Genoese shipyard. At the moment, no official mention has been made by the Carnival group company. Entering service in 1996, the vessel could still sail several years with another shipowner. But the coronavirus emergency reduced the chances of finding a buyer and forced her to end her adventure early. The hypotheses fo the future were the dismantling at a shipyard certified for demolitions following European regulations or its conversion into a floating hotel for the workers employed at the industrial sites managed by SGdP. In the meantime, the vesselshould be moved from Civitavecchia, where it has been laid up since May 25, 2020, to Piombino. If the first hypothesis were chosen, San Giorgio del Porto could carry out the preparatory operations for dismantling and then turn the ship to another shipyard; but it could also act on its own, being the only Italian industry certified for this type of operation as it demolished the 'Costa Concordia'. If it were decided to transform the ship into a accommodation vessel, the Marseille location where Costa and SGdP participate in the management of the Chantier Naval de Marseille would be privileged. The "Coasta Victoria" is the last ship in the fleet conceived before Costa joined the Carnival group.

Western Australia has recorded one new case of coronavirus in the night of April 27, 2020, concerning an 80-year-old woman married to a Perth-based passenger on the 'Costa Victoria'. Premier Mark McGowan made the announcement on April 28, adding there were now only 47 active cases of COVID-19 in the state, which includes 28 West Australians, 17 people who were on the cruise ship 'Artania' and two interstate Australians. 16 people were in hospital, including four in intensive care.